Image quality, power and intelligence to meet the needs of professional filmmakers and enterprises around the globe.

Featuring a 1-inch sensor and compact design, the Zenmuse X4S makes it easy to capture visually stunning images with the Inspire 2 and the CineCore 2.0 image processing system.

The Inspire 1 was a revelation. The first filmmaking drone in the world to integrate an HD video transmission system, 360° rotating gimbal and a 4K camera,as well as the simplicity of app control. The launches of the Zenmuse X5 and X5R cameras further cemented the Inspire as a critical tool for filmmakers around the globe.

The Inspire 2 takes everything that was good about the Inspire 1 and improves it. The image processing system CineCore2.0 has been upgraded to CineCore2.1,recording video at up to 6K in CinemaDNG/RAW and 5.2K in Apple ProRes when used with Zenmuse X7 camera. It goes from 0 to 50 mph (80 kph) in just 5 seconds andhits a maximum speed of 58 mph (94 kph) and has a max descent speed of 9m/s for unheard of speed and agility in an aircraft this size. A dual battery systemprolongs the flight time to a maximum of 27 minutes (with an X4S), while self-heating technology allows it to fly even in low temperatures.FlightAutonomy has been revised and developed specifically for the Inspire 2, providing two directions of obstacle avoidance and sensor redundancy.Increased intelligence adds multiple intelligent flight modes, including Spotlight Pro, giving even single pilots the ability to create complex, dramatic shots.An upgraded video transmission system is now capable of dual signal frequency and dual channel, streaming video from an onboard FPVcamera and the main camera simultaneously, for better pilot and camera operator collaboration. 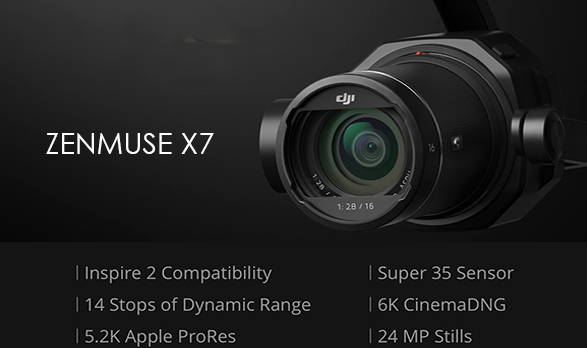 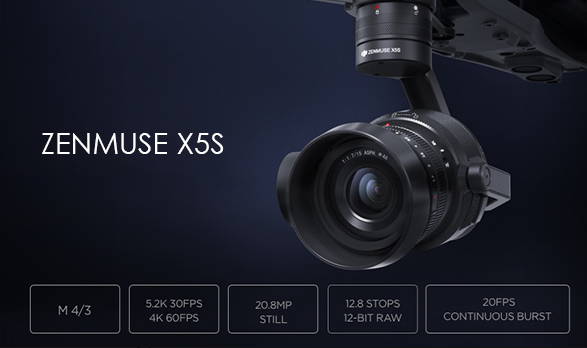 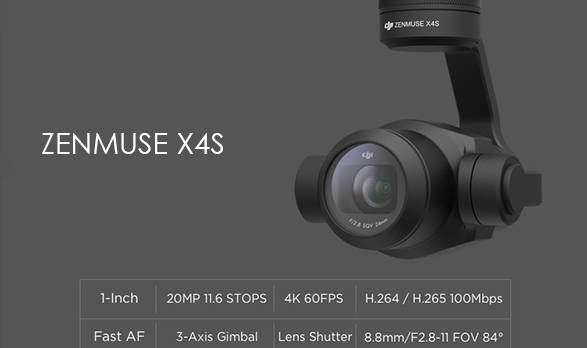 Spotlight Pro is a powerful tracking mode that allows even single pilots to capture complex, dramatic images. It uses advanced visual tracking algorithms to lock onto a subject during flight,regardless of the direction that the Inspire 2 flies, creating shots that would once have required a dedicated camera operator. If the gimbal comes close to reaching its rotation limits,the Inspire 2 itself will rotate in the same direction without affecting flight control or the shot being captured to free up gimbal movement.

It has two shooting modes, Quick Mode and Composition Mode. In Quick Mode, select an object to begin tracking. In Composition Mode, select the subject and the tracking position.When the subject enters the preset tracking position, press the shortcut to begin tracking. The gimbal can be moved during shooting for composition adjustments.Spotlight Pro is available in Intelligent Flight Modes TapFly, Waypoint, and Point of Interest.

The 2-axis onboard FPV camera separates the flight view from the main camera view, effectively giving the Inspire 2 a dedicated TapFly camera. Tap a point onscreen in the FPV view to set a flight route and the Inspire 2 will automatically fly along that route, leaving the pilot to focus on gimbal movement.

The ActiveTrack Mode allows the Inspire 2 to recognize a range of objects, from people to bikes to cars to boats. Tracking profiles that can be adjusted based on the subject being tracked means greater tracking precision.

Forward and downward vision systems allow the Inspire 2 to createa real-time map of its flight route as it flies. If the video transmission system signal is lost and Smart Return Home is enabled, it is able to fly home along its original route, and change to a straight line when it regains a signal. As it returns, it will use the primary camera to identify obstacles as far as 200m in front, allowing it to plan a safe route home. It is also able to reconnect more quickly after losing connection.